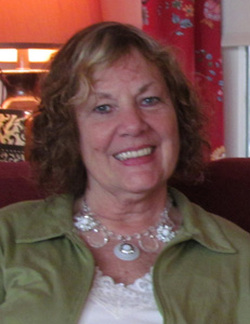 ﻿As a textile artist, I focus my art on "social justice" and "anti-war" issues.  My art is designed to provoke thought and emotion; to raise consciousness; and to galvanize change.

For many years of my life, I marched and protested against war and stood up for efforts to ensure that every individual receives the basic rights of a just society.

The processes and materials I use are designed to generate discomfort, sadness, disgust, and shock on the part of the viewer.  I use images such as crosses with dead soldiers' helmets perched on them, bodies torn apart, burning buildings falling down.  I use large overpowering images such as a dead soldier's coffin, a menacing airplane, an assault rifle.  I use beautiful colors to create an awkward juxtaposition of an infant's toys with a deadly weapon.  I make beautiful embroidery pieces stitched with the ugly words of war.  I intentionally use discordant colors to further the reaction that "it just doesn't feel right".

In making my art, I am witnessing to my great respect and empathy for the soldiers who are sent off to fight our wars by leaders who unthinkingly assume the conflict is between total good and total evil.  For the young black men and their families living in a system where "reasonable doubt doesn't mean much" and where "truth is concealed by fear of looking deep within ourselves: and where "justice is corrupted by the few." For those in the lesser privileged classes who face a jurisprudence system not always bold enough to address the discrimination issues they face.  For the those U. S. female soldiers overseas who stop drinking water after 7 P.M. so they won't have to use the bathroom at night and perhaps face being raped by a compatriot soldier.  For that same female soldier who has no where to report these horrors.  For the young Yemen boy making an assault rifle out of a discarded scooter and water bottle to earn money for food for his family.  For the iconic Vietnamese girl running down a road, her skin shredding from napalm.﻿